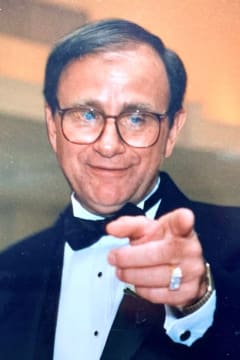 Del, 85, left this world on Thursday, May 5, 2022 and headed to his heavenly reward. Born in Pittsburgh on December 15, 1936, Del lived his entire life here. He credits his family as his greatest accomplishment. Married to the love of his life, the late Barbara, for 61 years, they created a loving family that brought them great joy and 10 grandchildren.

Del was a gifted commercial artist who started his career out of high school with Dart Studios, then with Barton Studios and Group Marketing before starting his own ad agency in 1976, Corporate Marketing Services. He was highly valued by industrial clients like US Steel, Westinghouse, and Joy Manufacturing, where he made complex products understandable and interesting. He was recognized by the Business Marketing Association as Executive of the Year upon his retirement in 2000.

Del and Barbara loved to travel, taking exotic beach vacations with friends and extended trips to Europe. They enjoyed bowling and golf together, and formed many lasting friendships as 43-year members of South Hills Country Club.

He lived the American dream: Born in the middle of the Great Depression, Junior, as his wonderful parents called him, learned the value of hard work as he delivered groceries in high school so he could buy a new 1954 Mercury. He married his high school sweetheart, bought a red brick house in the suburbs, fathered five children in the next 8 years, and sent them all to Catholic school and then to fine colleges.

Del was a leader in local politics, starting as a Young Republican, rising to committee chairman, and was elected to 3 terms on the Whitehall Borough Council.

Respected for his strong moral character, Del also had incredibly strong hands and could actually tear a phone book in half, to the amazement of all who watched.

Beloved father of: Steve and his wife Elaine of McLean VA, Daniel and his wife Michelle of Valencia PA, David and his wife Jane of Wrightstown PA, Jeff of Pittsburgh PA, and Julie and her husband Fred Stinebiser of Northville MI. Del’s 10 loving grandchildren brought him so much joy: John, Danny †, Abby, Megan, Michael, Matthew, Lena, Mark, Zachary †, and Joshua. He is surely in heaven with his grandsons, Zachary and Danny. Del was preceded in his death by his parents Emilio Sr. and Elia and his younger brother Robert.