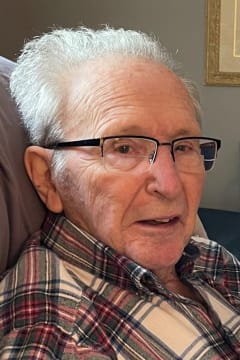 Beloved husband of Joan Jones and the late Alice May (Mathewson) Robertson; loving father of Alice Marie Teagarden, Beth Ann (Tim) DiGregory, and the late John Robertson; stepfather of Lisa Blohm, Frank Jones and James (Deborah) Jones; cherished grandfather of Katie (Dan) Ridout, Jamie Teagarden, Alexander Teagarden, Brooke DiGregory and four step grandchildren; great-grandfather of three and step great-grandfather of four; son of the late William and Alice Robertson. Howard graduated from McKeesport High School in 1952. He was a proud member of the United States Army Marching Band. Howard graduated from IUP with a Bachelors Degree in Music Education in 1956, he earned his Masters of Education Degree in 1962 and his PhD in Education Administration in 1970, both from the University of Pittsburgh. After Howard's extensive education, he went on to work as a music teacher and Superintendent for numerous districts until his retirement. After which he became a Director of Education in the Health Care Industry. Visitation and services were held privately. Arrangements handled by the John F. Slater Funeral Home, Inc., 412-881-4100, 4201 Brownsville Road, Brentwood 15227. If desired, family suggests contributions to the Jefferson Hills Library, 925 Old Clairton Road, Clairton, PA 15025.