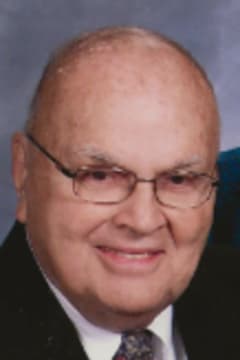 Obituary For James B. Schmunk

Jim was the beloved husband of 71 years to Shirley Smith Schmunk and was a devoted father, grandfather and great-grandfather. In addition to Shirley, he is survived by his daughters Linda (Bill) Clute and Debbie Soles, and his son Jim (Diane) Schmunk. He was intensely proud of his nine grandchildren and his 17 great-grandchildren. Jim graduated from South Hills High School in 1946. He attended the University of Pittsburgh where he earned his Bachelor of Science, Master of Education and Doctorate of Education degrees. He began teaching math at Brookline in 1950, was a Principal in the Baldwin-Whitehall School District and was Asst. Superintendent at Carlynton and Churchill Schools. In 1980 he was appointed Assistant Executive Director of the Allegheny Intermediate Unit and served until 1992. He also served on the Board of Education for Baldwin-Whitehall School District, was Acting Superintendent of Steel Valley School District, and was a past President of Phi Delta Kappa. He also served as Chair of Tillotson School since 1984. Dr. Schmunk was elected to the South Hills High School Alumni Hall of Fame in 2016. Jim loved family, life and people. He served in leadership roles at Hilltop United Methodist Church and Jumonville. He found joy in playing Santa with Shirley as Mrs. Claus and watching every Pittsburgh sporting event. Friends will be received on Sunday, April 11, 2021 from 1:00 - 6:00 p.m. at the John F. Slater Funeral Home, Inc., 412-881-4100, 4201 Brownsville Road, Brentwood 15227, and from 12:00 - 1:00 p.m. on Monday, April 12, 2021 at Hilltop United Methodist Church, 631 East Warrington Avenue, Pittsburgh, PA 15210. Funeral Service will follow at 1:00 pm. In lieu of flowers, contributions may be made in his honor to Hilltop United Methodist Church, Jumonville School, 887 Jumonville Rd., Hopwood, PA 15445, 724-439-4912, or the Tillotson School, 4900 Girard Rd, Pittsburgh, PA 15227, 412-881-2268. Mask and social distancing guidelines must be adhered to. 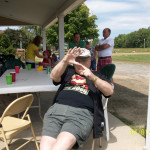 Jim will be missed by MANY and our condolences to his entire family! A favorite memory was Jim and the man who almost was my father-in-law, Chas Sowden, as Smurfs at Family Week! Ron and Amy Burkert
- Ron Burkert
To share memories of Jumonville family week by Jim Shcmunk I missed seeing him in Heaven always special to us have been register for rooms at Washington lodge Varytime seen him on his scooter around coming through At the dining all we always give him money money for pictures and DVDs Sometimes he wears his black suite with his 🎩 hat It was the carnival theme Also sat in the rocking chairs he was a king 👑 Also add great older friends of. Jack Furniss & Donna-Furniss And Jim Schmunk back togather again in heaven to talk each other There always a special couple going to see him There Daughters Vary time seen Jim with his scooter cross Thur the road to the chapel Debbie Soles. Linda And Bill Clute Jim And Diane Schmunk We love you so much I will give them my prayers and there hugs to give you much loved by his Beloved wife Shirley Schmunk I loved there Jumonville family week songs For his memorial service it's vary sweet Will give you prayers from the Parks family. Furniss Family McNeal family Taylor Family Parrott Family Nina And Bill Parks Sierra And Logan Parks Christian And Mariely Cruz Furniss Emma Furniss Julia Furinss Susan And jeff Furniss Jill And Scott Furniss. Graham and ruby Furniss Natalie And Chris Jones. Heather McNeal Elizabeth And Ned Landon Parrott Nancy And Ed McNeal John And Diane Taylor Guy Taylor.
- Guy Thomas Taylor
It is hard to believe that I've known Jim for over 50 years. His presence will be missed at Jumonville, especially Family Week where he was so well loved. You have run your race well and finished the course. Welcome to your home in heaven!
- Ben Cooper
My most sincere sympathies Mrs. Schmunk, Linda, Debbie, Jimmy and family. Mr. Schmunk touched and shaped so many young people's lives. I remember him fondly both as my elementary principal and then later as an adult .... whenever I would see him he always had a funny story about the "old" neighborhood. Heaven is richer tonight having gained a wonderful soul. Blessings, Cheryl Palmer Densmore.
- Cheryl Palmer Densmore
Mr. Schmunk was a smart, witty, gentle man. I spent Thursday afternoons after school at his house, taking piano lessons with Mrs. Schmunk. His contagious laugh filled the room as he played card games with my siblings in the background. He took time to compliment me as I played through scales, and became a true friend. He was a go-getter; I'll always admire his positivity and energy.
- Emily Isaacs
Mrs. Schmunk was my sisters and my piano teacher for 9+ years. Whoever wasn't playing the piano with Mrs. Schmunk, we would play games with Mr. Schmunk. Every time we walked into their house, Mrs. Schmunk would be waiting by the piano and Mr. Schmunk would be on his way down the steps, laughing, asking if we brought Uno. He would always laugh when he played the draw two card and hid his cards behind his hands, so we couldn't tell when he was about to win. Together, Mr. and Mrs. Schmunk were such a loving, fun, and good spirited couple. Sending prayers to the Schmunk family.
- Sara Isaacs
Mr. Schmunk was fondly known as an administrator. However, his positive impact on lives stretched well past his professional career. Mr. Schmunk was witty, understanding, and simply jubilant when I met him in his retirement. It's rare to meet someone as good natured as he was. They don't make people as good as the Schmunk's. Prayers for the Schmunk family and the countless lives they touched. Evan Isaacs
- Evan
Many prayers for Shirley and the rest of his family! I have such sweet and fun memories of him. He was dedicated to his family and served them and the Lord well! Rest in the peace and joy of heaven! Nancy Scott Burton
- Nancy Burton
Jim was the heart and soul of Jumonville ! So many fond memories of hi leadership and laughter. An all around Great guy and Christian Man! Bob and Karen Watson
- Bob Watson
I loved Mr Schmunk,he was the Principal of the school I attended when young.I knew his daughter Linda,and he bowled with my dad Ben Beck.I also saw him at Old Forbes Field a few tlmes.I have many memories of him,God Bless Him and may he rest in peace,,I hope to see him in heaven. Gary Beck
- Gary Beck