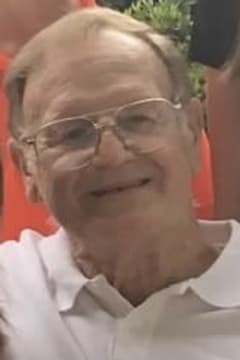 On Friday, January 1, 2021, Ronald “Whitey” Baldinger, passed away at the age of 87. He was a loving husband of 57 years to Anna Baldinger and father of five children, Kevin, Pamela, Roy, Eric and Patrice. Born on December 8, 1933, a Pittsburgh native from the Mt Oliver/Allentown area. His mother was Leona Heinrich and father Henry Baldinger. He was a brother to the late Arlene Salazar, Rex Clayton Beech and his life-long best friends Edward “Buddy” Farrell who was like a brother to him and his dear friend Mel Humphreys. Ronald is survived by 15 Grandchildren, Hope, Paige Grant, Triana, Canaan, Nicole, Elizabeth, Daiden, Sydnie, Gage, Logan, Seth, Lauren, Emma, Ian and 3 Great-grandchildren Ozzy, Lucas and MaKenzie. Ronald “Whitey” Baldinger was a kind, caring and giving person. He had a soft heart and he spent much of his time telling stories and making people smile. Ronald was a beloved husband who adored his wife. They went everywhere together. He was always by her side, holding hands, arm around her or giving her a kiss on the cheek. He built a home of love. He loved to tinker with things around the house and build things. He loved to sit on the porch and watch the birds. He loved to create his own lawn ornaments such as bird houses, bird baths and even a light house. His creations often made us laugh. His ability to remember everyone he ever met and to tell stories was a part of his everyday life. If you sat by him, he would tell you a story. We heard them a million times. He knew this and he couldn’t help it. He would often smile and he would say, just one more story. His accomplishments go beyond his family and being a loving husband and father. In 1954 he joined the United States Army Airborne. He loved to play basketball in his youth and played for several teams and tournaments. In 1956, he and his best friend Buddy began performing Clowning Diving Acts at local swimming pools. They made people laugh with their silly routines. In the 1960’s they went on to become the Pittsburgh Water Clowns for the TRIAD (Three Rivers Improvement and Development Corporation) and during the Three Rivers Regatta. They performed shows on the river that included waterskiing acts, jumping from the bridge with a kite, and inner tubing from a ramp that was pulled by a boat. Clowning around and having fun. Every year he was apart of the Jerry Lewis Telethon. Dedicating his time to help others was a part of his life. He was on Chilly Billy Theater during a Halloween special as a werewolf with a costume he made. In 1980, he retired from water clowning, but continued to be an active member of the International Shrine Clown Association as a Shrine Clown. He performed in several circuses and charity and fundraising events. He even won the Best Clown in Las Vegas one year. Being a clown was his passion to entertain and bring so much happiness to others. He once said, A smile from anyone is great. A smile from a child is forever. ~ Whitey. He was a natural at doing this and his own smile, daredevil stunts and silliness will be remembered by all. His next adventure led him to work as an extra and a Stand-in for many movies filmed in the Pittsburgh area. With every movie, he became friends with the producers, the actors and the set crew. Ronald, Whitey, Dad, Pappy will be loved and missed by his family and friends. He was a member of the American Legion, Syria Shriners, and Pipefitters Local Union 520. Donations can be given to the Shriners Hospitals for Children and Muscular Dystrophy Association which were both near and dear to his heart. Due to the current health crisis, services will be held privately. Arrangements handled by the John F. Slater Funeral Home, Inc., 412-881-4100, 4201 Brownsville Road, Brentwood 15227.

I offer my sincere condolences to all of Ron's family. My dad, Dave Erwin, and I were neighbors of Ron and Anna's at the 4-J mobile home park in Conneaut Lake PA, where we were right across the road from the Baldingers. We lost touch with them after 2006, when we all had to part ways. They were great neighbors and have been and will be missed. In sympathy, Victoria Erwin
- Victoria Erwin
Uncle Ronnie was one greatest men ive ever known.im sure hes in heaven and has a smile or story to tell.May he rest in peace..Love you Uncle Ronnie.You will be forever missed.
- Lori L Jones
I will miss the stories the most, he always had the best! RIP my friend , you'll be miss by all of us!
- David Arlia