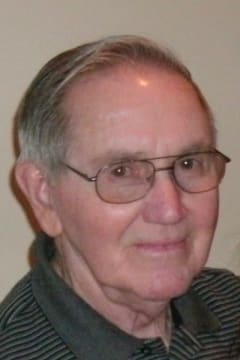 Bill was born in Gallitzen, Pennsylvania on December 26, 1925 to James and Isabelle Boland. He enlisted in the Marines and fought in the Pacific in World War II. On June 22, 1955, he and Winifred Fleming were married in San Antonio, Texas. After the war, while working as a clerk at the Federal Bureau of Investigation, Bill received an accounting degree from Strayer University and became an FBI agent. Bill had a distinguished career with the FBI spanning over 30 years. He spent the majority of his career in Detroit and finished his career as the Special Agent in Charge of the Grand Rapids office. He and Win relocated to Pittsburgh in 1996. Bill was a loving husband and father. He was a devout Catholic and attended daily mass. He was a lector and Eucharistic minister and a charter member of the Grand Rapids, Michigan Knights of Columbus. After retirement, he volunteered to take Communion to hospital patients. He was a lifelong fan of Notre Dame football and the St Louis Cardinals. After moving to Pittsburgh he became a Pirates fan but still rooted for the Cards when they played. He took up golf when he retired and loved the game. He was also an avid card player - card games were serious business! Bill will be remembered for the love and time he gave his family, friends and community and his example of faith and courage. Bill is survived by his beloved wife of 65 years, Winifred (Fleming); children, Kevin (Fay), Bryan (Colleen) and Jane (Christopher) Keough; grandchildren James (Jessica), Kelly, Terence (Kim), Garrett, Patrick, Daniel, Ian, and Nathan Boland, Abigail and Patrick Boland, and William and Erin Keough; great grandchildren Aidan Bronkar; Avery, Brie and Finley Boland; and Jaxon Boland and his sister, Mary Ann (Ray) Steinbugl. He is preceded in death by his parents James Joseph and Mary Isabelle (Litzinger) Boland and sisters Lois (George) O’Friel and Sr. Catherine. Family and close friends will be received at the John F. Slater Funeral Home, Inc., 412-881-4100, 4201 Brownsville Road, Brentwood 15227 on Sunday, August 30, 2020 from 4-6 p.m. Due to the current public health crisis, masks and social distancing guidelines must be adhered to. Mass of Christian Burial on Monday morning in Blessed Trinity Parish, St. Sylvester Church at 11:00 a.m. Everyone please meet at church. The committal service at the National Cemetery of the Alleghenies will follow the funeral mass. The family suggests memorials in lieu of flowers to the Alzheimer’s Disease Research Center, UPMC Montefiore, Suite 421 West, 200 Lothrop Street, Pittsburgh, PA 15213, the Angelman Syndrome Foundation (www.angelman.org ) or the Foundation for Angelman Syndrome Therapeutics (www.cureangelman.org).

Please share a condolence, photo or memory of William. We welcome all condolences that are positive and uplifting that will help family and friends heal.