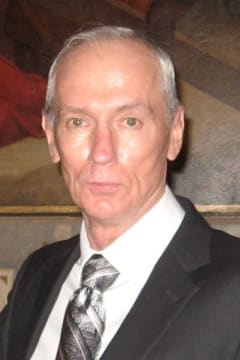 William V. (“Bill”) Mangan Jr. of West Mifflin, formerly Brentwood, left this world after a short battle with cancer, on May 15, 2020, in the arms of his loving wife of 42 years and surrounded by his two sons. Bill retired from Verizon Communications in 2016. He was a craftsman who prided himself on his woodworking. Bill also cherished studying history, and he dearly loved the road trips he took with his wife and sons to hundreds of historical sites around the country. He regarded his most important roles as husband, father, uncle, brother, son, and granddad. Bill is survived by his wife Margaret (Peg Lanz) Mangan; William (Allison) Vincent Mangan III of Andover, Massachusetts; Joseph (Elizabeth Sharr) Lanz Mangan of Arlington, Virginia; and his first grandson: two-week old Jack William Mangan. He is also survived by his six sisters: Mary Ellen Evans of Brentwood; Margaret Mangan of Washington, DC; Kathy (late David) Dice of Emsworth; Adrian (Charles) Flink of White Oak; Theresa (late Robert) Troyan of North Braddock; and Lorraine (Luke) Gelinas of South Hadley, Massachusetts. Also, he is survived by his sisters-in-law: Lynn (Vincent) Doran of McLean, Virginia; Laurie Lanz on Valencia; and Cathie (James) Adams of Gibsonia. Bill was the very proud uncle of 14 nieces and nephews, and a great-uncle to 8 nieces and nephews. He was preceded in death by his parents: William Vincent Mangan, Sr. and Marie (Gaughran) Mangan. Due to the current pandemic, a funeral mass will be held at a later date. In lieu of flowers, the family requests well-wishers to consider making a donation in Bill’s memory to the Greater Pittsburgh Community Food Bank: https://www.pittsburghfoodbank.org.

The world was left a better place by Uncle Bill. We will miss his inquisitiveness about the world, thoughtfulness, and his laugh. His memory will live on in his children, Bill and Joe, of whom he was so enormously proud. Love, Kelly, Matt, Mila, and Joseph
- Kelly Doran